Slipping through my fingers...

Time seems to be running away from me at the moment - I realised this weekend that there's just over two weeks (and two Tuesday rehearsals) left till the concert! Rehearsals are going well, and I'm really looking forward to getting into the cathedral to hear the score on the organ.
Tickets are available, details can be found on the poster below: 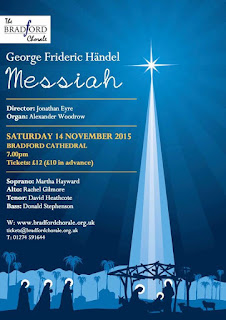 Hello, Is it me you're looking for?

It was great to welcome a few new faces to rehearsal on Tuesday, hopefully they like us (and our music) enough to keep coming back!

We started looking at the Bach St Luke Passion, and once again, the problem of languages showed up. Languages, along with IT, are not a strong suit for me, but I just don't get why singing in German (and French, because we've done that too) is so much harder than singing in Latin. I've studied both French and German, yet somehow, Latin 'fits' in my brain much better than the others. I got so fixated on trying to get the words right at one point, that I ended up singing a third above the rest of the sopranos!

One saving grace is that all the ends of the lines rhyme, which does help a bit. But I think it's going to take a lot more practise before I can start humming these ones!
Posted by Louise at 11:07 No comments:

Do you want to be in our gang?

Tomorrow night is the open rehearsal for any singers out there who want to come and see what we're about, and what kind of stuff we do. Details below: 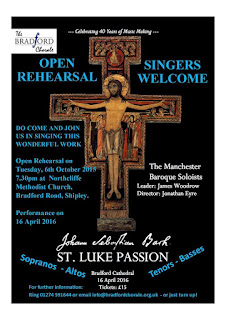