It's the final countdown...

Final rehearsal for Messiah went really well on Tuesday. We had a reverse run-through - starting at the end and working forward - and the majority of pieces sounded really good on the first run through. The only problem we had were some timing issues with 'Let us break their bonds' where we sounded a bit like we were trying to catch a train that had already left. It took us a couple of goes, but we got there in the end and it sounded great. I'm really looking forward to hearing the Reg Vardy Brass Band in full swing - once we all get together I think it'll sound amazing!

There are still some tickets available for the concert (though not many) so if you find yourself at a loose end on Saturday night, come along to Bradford Cathedral and indulge in a bit of culture.

Back Where You Started From

Louise (the Chorale's publicity guru) has sent me the piece on the Chorale that appeared in one of the local magazines a couple of weeks ago, this time with added pictures!


Kathleen Sharp has been a member of The Bradford Chorale since its formation. Here she gives a brief, personal history of ‘Our Choir’.


‘The inaugural meeting of the choir took place of January 6th 1976 in the church hall of St James, Thornton, Bradford. The lady seated at a table by the door took my name/voice and handed me several pieces of music. The hall was quite full, being small, I found a place near the front.


There were to be no auditions, everyone had been personally invited by James Ashworth, the young man who was to be Musical Director and Mentor. He explained his ideas and ambitions for the choir, he hoped we would be able to give a performance around Eastertime. We would be known as ‘The Ashworth Singers’, rehearse every Tuesday in the hall, and pay a modest weekly subscription to defray costs.


We then sang through the pieces. I had not sung with such a large group of mixed voices before – it was very exciting! On my way home I determined, that whatever efforts I had to make, I wanted to sing with this choir.


The first concert was held on Maundy Thursday in St James. We sang ‘Ave Verum Corpus’ (Mozart), ‘Ave Maria’ (Bruckner) and ‘Requiem’ (Faure). I was on Cloud Nine! ‘NEW CHOIR MAKES FIRST CLASS DEBUT’ was the verdict of the local press. 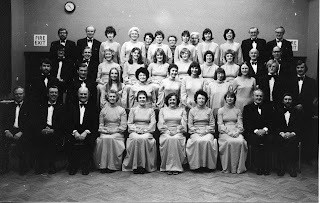 
New members were auditioned and on at least one occasion the whole choir, which produced some interesting results. One lady admitted that she couldn’t sing a note; she came to keep an eye on her husband!


When James decided he needed to concentrate on his personal singing career, an advertisement for a new conductor was placed in several local papers. In a short time several applications were received but the secretary thought that special attention should be paid to the one which included a reference from Sir Georg Sölti!! Thus Douglas Robinson (Robbie), retired chorus master of Covent Garden and lately of Huddersfield Choral came to us. As a result of a poll taken by the choir we became Bradford Chorale. Douglas ran a tight ship, Sunday afternoon extra rehearsals were scheduled when necessary. His last concert was a performance of ‘The Messiah’ for which he, the choir, and musicians were afforded a standing ovation. 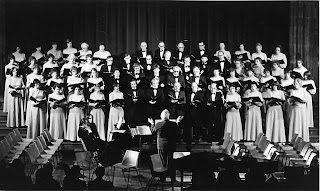 Since then we have had a number of conductors of varying ages, each with different ideas of performance. A few were gems, and we have such a one now. Paul has the vigour and daring to lead the choir down new and exciting paths. The future is bright, see our Future programmes leaflet.


I know of no better antidote to life’s woes than music making. So if you can, come and join us. If that is not possible, come to a concert and give us a hearing.’ 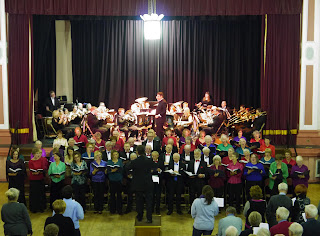 
Handel's ‘Messiah’ in an arrangement for brass band and choir with the championship-winning Reg Vardy Band.


A concert of European sacred music culminating in Fauré's beautiful setting of the ‘Requiem’.

At this week's rehearsal we were running music for the April concert, not Messiah. Though thankfully I'd taken all my music to rehearsal or I would have been really stuck.
First though, we had the Chorale's AGM. It was the first AGM that I'd ever been to and I have to admit, I spent a lot of it trying to work out what was happening. By the end, we'd voted on everything that needed to be voted on and agreed everything that needed to be agreed, so I assume it went well.

Musically, progress was also made. Having run Requiem last week we spent this week concentrating on the other pieces for the April concert, including Gott ist mein Hirt and Cantique de Jean Rancine. Gott ist mein Hirt sounds really good notes-wise and the German is getting better, thanks to some teaching from Katharina, a native German speaker. To uneducated ears (mine) we're not mangling it quite as badly as we were, although whether it'll make any sense to those who do speak German remains to be seen. Cantique de Jean Rancine is also getting easier, though I still think it's strange that its taken me so long to get to grips with a language I thought I (vaugely) knew. We also had some linguistic gymnastics with the Latin verses of Miserere, too many consonants to fit in, but it's getting there.

Fingers crossed Messiah is also getting there - I realised that the two rehearsals I missed mean I've only been to half  of the rehearsals for the March concert and I'm mildly concerned that come next week, I won't be able to remember any of it!

Tickets for the Messiah concert are going well, if you haven't got any yet, contact any member of the Chorale, or click on the link to the Chorale's website and order online.
Posted by Louise at 18:10 No comments:

I'm back from holiday and unfortunately a bit behind, which is why I'm posting about what happened last week today, just before tonight's rehearsal.

We ran Faure's Requiem for the first time last week, only missing out the soloist parts. The way we tend to rehearse means that we're always dotting around the pieces, and if you haven't sung it before and don't know the piece very well, it can be difficult to imagine how one piece is going to join up to the next one. Thankfully though, from my point of view it went quite well and sounded pretty good.

Hopefully I'll be able to say the same about Messiah tonight. For various reasons, I've missed a couple of Messiah rehearsals and it feels like forever since we had a sing though it. Bit scary considering the concert is only a couple of weeks away.

*Everyone, or in this case every piece.
Posted by Louise at 18:40 No comments: