So we may not have been angelic on Saturday, but the concert went very well. I managed to get through my reading without staring down at my words, or rushing too badly (both things I have a tendency to do) and the other readings were either amusing or thought-provoking.

Musically, things went well - I started off singing the wrong verses to a couple of the congregational carols a couple of times, but thankfully the Sopranos on either side of me were loud enough to drown me out!

We've now got a few weeks holiday to relax and recoup before rehearsals start in earnest for the St Luke, which feels like its going to be a challenge! (a good one though)

Merry Christmas!
Posted by Louise at 10:09 No comments:

It seems like just a couple of weeks since Messiah, yet it's now only a fortnight until Christmas and I haven't written an update for weeks.

I'm very pleased to say that the Messiah was a great concert. We had the audience numbers we hoped for, and all the soloists, Martha, Rachel, David and Donald were brilliant. It goes without saying that Alex Woodrow was fantastic, once again getting round more notes than you'd think was possible. Several audience members reported how much they had enjoyed hearing the music again (and in some cases for the first time).

Choirs are always in demand at Christmas, and the Chorale has already done 2 lots of carol singing. Last weekend we leant our support to Marie Curie, singing outside ACW Garden Centre. Thankfully the rain held off and though cold, we had a good sing. On Wednesday, we also entertained the members of staff attending the Morrisons Christmas dinner. It was hard work, singing for such a long period of time, but many members of staff thanked us, or gave us a wave as they left, so I think it was appreciated. We're also off to Haworth this afternoon to take part in the Torchlight Parade - I'm just hoping the weather's better than yesterday!

We're now only a week away from the Christmas concert, all the details are below. I've had to miss a couple of rehearsals due to work commitments, so I'm feeling a little behind on the less well known pieces - I've also got a reading to master for the concert, so I've plenty to be practicing! 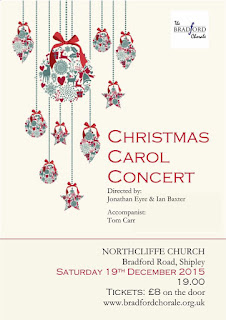